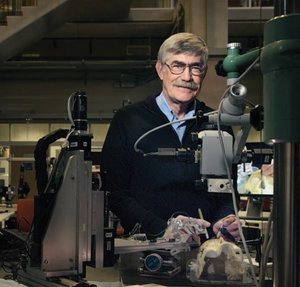 Where the work was done: IBM T.J. Watson Research Center in conjunction with University of California, Davis

What we accomplished: Taylor (pictured) began working on medical robotics in the mid-1980s when the field was virtually nonexistent. His work at IBM Research, where he developed the AML robot language, has led to breakthroughs in computer-assisted brain, spinal, ear, nose and throat surgeries. Robodoc, a prototype hip replacement surgical assistant, is considered the world's first surgical assistant robot for a major surgical procedure.

From HUB, the Johns Hopkins University website: "During his tenure at IBM, Taylor also developed the Laparoscopic Assistant Robotic System, which constantly displays the surgical field at the center of a screen that can be monitored by the operator during laparoscopic surgery. The system improved this type of medical procedure by attaching a joystick to the surgical instrument to enable the surgeon to manipulate the endoscope without the help of an assistant. During development of this system, mechanical safety was enhanced via the Remote Center of Motion mechanism, which is also employed in da Vinci computer-assisted surgical systems that are now in use worldwide."

BACK TO MEDICAL, HEALTH INFORMATICS and COMPUTATIONAL BIOLOGY
BACK TO IBM RESEARCH ACCOMPLISHMENTS